Published by JenPonceAuthor on July 17, 2016 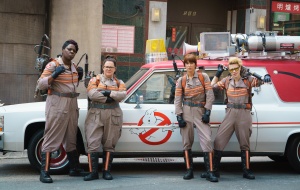 I loved Ghostbusters. There was just enough new that it kept me interested, I laughed a lot, and just smiled through the whole damn thing.

It was excellent to see the nods to the old movies and characters, but I’m going to go out on a limb and say I love this one the best. Why? Because I adore Melissa McCarthy, that’s why. And, well … Chris Hemsworth knocked it out of the park with his Kevin character. (He’s super good at being ditzy, I have to say.)

I was reading posts about the movie today and quite a few dudebros have been saying, “I don’t know why Chris Hemsworth was even in the movie. He didn’t add anything to the story, he was just eye candy and that offends me.”

Oh, really? REALLY? You’re upset because he’s only in the movie to be pretty (according to you, you who haven’t even SEEN the movie?).

It’s not fun to be reduced to a stereotype or a pretty face. And I would never advocate to do that to anyone, female or male. I don’t want the norm to swing to the other side and I don’t want to see a glut of movies with pretty men who have little or no lines whose only job is to look good. I would like people feeling marginalized by Chris Hemsworth’s role to ask themselves why it bothered them and wonder if maybe, just maybe, it bothers women the same damn way and more often. (And then expand your thoughts to marginalized and under-represented groups of people to see just how homogeneous and lacking in diversity our entertainment really is.)

Anyhoo, I loved the movie. There were spots where maybe it tried a tiny bit too hard, but the chemistry of the actors was fantastic and the story was fun. I’d totally go see it again and I really really hope there’s a Ghostbusters 2 down the road.