When Women Say No 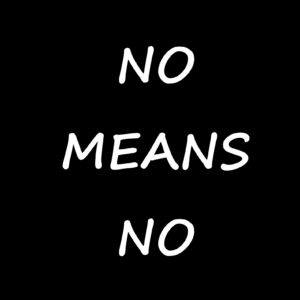 say no. He felt that since he, personally, didn’t push it when a woman said no, then it was safe to say that women just overreact when it comes to strange men asking them out. He felt that women shouldn’t lie when he asked them out. For instance, he asked a woman out and she said, “Sure, I’ll text you.” Needless to say, she didn’t text him, which led to his conclusion that she lied to get rid of him instead of just saying, “No, thank you.”

Maybe she did. I wasn’t there so I have no idea how it went down. I don’t know who she was or what other experiences she’s had with strange men asking her out. I don’t know the circumstances in which he asked her. Maybe he came off creepy. Maybe she was feeling bitchy. There’s no way to know. (I can point out that there’s no reason women should be expected to be polite to strange men asking them out. If a guy came onto Mr. Misandry, would he give him a polite “No, thank you,” and move on with his life? I’m guessing not.)

This fear, apparently, is misandry. Because not all men do this, therefore why talk about it at all? Why worry, ladies, that there are websites dedicated to reporting instances of violence when women say no, when all men don’t do this? It’s okay to trust any man in any bar or subway or restaurant or even in your own living room because not all men hurt women.

I know and you know that there are a lot of really great guys out there. Fantastic dudes who will lay down their lives for other human beings, whatever their gender.

I know and you know that there are also a lot of really scary men out there. Crazy dudes who will burn down a woman’s house because she wouldn’t go out on a date with them.

Are there crazy women out there? Sure there are. There are easy-to-find examples of women who have harmed or killed men. As a sexual and domestic violence advocate, I’ve worked with female and male victims. No matter their gender, they do not deserve to be harmed.

But ask any random man on the street if he’s afraid to ask a woman out because some women have killed men, and he’ll probably say no. Why is that? Are women just weenies? Are they evil feminists bent on the destruction of the entire male gender?

Historically speaking, women have been subjected to violence for thousands of years. There were exceptions: women who were powerful enough, strong enough, or beautiful enough to avoid the day to day violence that many women experienced. Violence written into laws, written into contracts. Women of color had it far worse than white women. Poor women had it far worse than rich women. But don’t forget, women in the USA didn’t even have the right to vote until August 18, 1920. It wasn’t until 1993–yeah, 1993–that marital rape was outlawed in all 50 states.

So, why wouldn’t a woman just say, “No, thank you,” to a strange man asking her out?

Because we still aren’t given a voice. Because up until 1993, we couldn’t say no to sex in our own marriages. Because in 8 states EVEN TODAY still have marital rape exemptions for some offenses. Because Oklahoma just said that oral sex performed on an intoxicated person isn’t rape. (I’ll bet they wouldn’t uphold a drunken sign-over of a car or house though, would they? Because in THAT instance it’s clear the person was incapacitated, but if a 17-year-old boy wants to get some from a drunk 16-year-old girl, she just had it coming, right?)

In his quest to prove his point, he ended up proving the point of the original post. My friend asked him to stop and despite his insistence that he would always take no for an answer, he continued to argue the point until she finally got fed up and blocked him.

He didn’t take her politely worded no for an answer–the thing he said he never got from women and would abide by if he did. He couldn’t do that one simple thing and then he wondered why there are a lot of women who are afraid of what will happen when they say no.

I have three great boys. I love them dearly and I don’t hate their gender one bit. They are cool and sweet and kickass when they need to be. And guess what? They know what the word “no” means. They know that it’s a dangerous world out there and stupid shit goes down all the time. We’ve talked about gender equality and masculinity and femininity and they are proud to be dudes. I’m proud of them. They don’t think I hate them when I point out sexism. I listen when they see and point out things that disparage their gender. We talk.

No, I don’t think all men are evil. I know three of them who are damn fine men and many more who walk in this world with wisdom and kindness.

But am I still wary when a strange dude comes up to me and asks me out? Yeah. Do I get worried when I say no and he pushes it?

Because of what happens when women say no.