While You Were Whining …

Published by JenPonceAuthor on July 3, 2015

While you were whining, that dude with the hat over there smiled at you. You missed it. You were too busy feeling sorry for yourself that no one ever smiles at you while you’re out and about.

While you were whining, that reader took time out of their busy day to write you a review. You missed it. You were too busy counting all the people you know who haven’t shown up as “Verified Purchase” reviewers on Amazon. 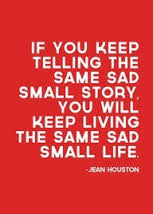 While you were whining about being forever alone, you missed the serious hots that woman on the other side of the bar has for you.

While you were whining about no one ever loving you the way you want to be loved, someone is doing their best to love you the only way they know how. (Why do I feel like I should sing the Duke’s of Hazard theme song right now?)

While you were whining about the fifty likes on your ‘friend’s’ post about her spaghetti dinner compared to the one like on your post whining about never getting any likes, half your friends’ list slunk away into the internet wilderness, hoping you wouldn’t turn your evil eye on them. (I put friend’s in quotes up there, because if you’re truly that awful that you can’t be happy for her … what? Success? She’s successful for getting likes about spaghetti, really? … happy for her ‘success,’ then you need to know you aren’t her friend.

While you were whining, gazillions of good things happened in the world. Sure, crap happens too. I know that not all people can be happy all the time. But you gotta know that your stomping and temper-tantrum-throwing and screaming isn’t going to get you the thing you s 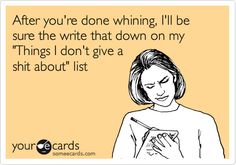 ay you so desperately want.

People don’t deserve to get dumped on because you’re having a bad day. People don’t deserve being emotionally manipulated into doing the things that validate you. Be less of an ass if you want more friends. Open your damn eyes and smile more if you don’t want to end up alone. Do the work you need to do to make yourself someone people want to be around. You are not owed friends because you are on this earth. You are not owed a relationship partner because you did something nice for that person that one time five years ago. You are not owed respect because bad things happened to you when you were a kid, because you were abused, because a robot from the future abducted you, tortured you, and tossed you back to Earth a shadow of your former self. Having bad experiences doesn’t earn you the right to be mean to other people. It doesn’t excuse you from being a decent human being.

You deserve to have a great life with friends who honor and appreciate you, but only if you understand that those friends deserve the same honor and appreciation from you. But remember, your idea of honor and appreciation will probably look a lot different from their idea. And just because their version doesn’t look like your version doesn’t mean they are wrong. It doesn’t mean they don’t appreciate you as much as you appreciate them. All it means is they show their appreciation differently than you. Friendship can’t grow when the greenhouse is 100 degrees one minute and -50 below zero the next. Give people time to learn to enjoy your particular brand of crazy. Zucchini doesn’t happen overnight, you know. 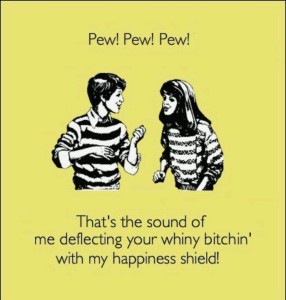 Stop doing so damn much of it.

That person who sees victims of domestic violence dealing with whiny abusers and other folks who don’t even know that this kind of emotional manipulation is damaging and wishes people would whine less and be kinder more often.