Published by JenPonceAuthor on June 5, 2015

Author Tricia Zoeller has been blog touring this week!

If you missed it, you can check out the blog tour schedule below and walk a mile in her internet footsteps.
BLOG TOUR SCHEDULE – The Darkling Chronicles by Tricia Zoeller – Form Responses 1

So, why is she touring, anyway?

I’m so glad you asked! She’s showing off her new books. You should check them out. There are links at the bottom of this post. There’s pictures everywhere. And if you keep reading, you’re going to find some cool extras I think you’ll enjoy! 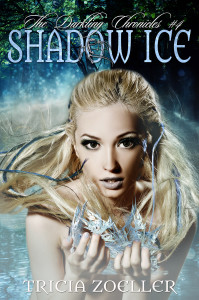 So much pain to bear for something new to come.
Despite a rocky start in life, Nalene has survived twenty years in the sea cliffs of the Aglatian Sea. She struggles daily to master her water energy rather than succumb to it. An icy constitution has forced her to rely on her sister for care, protection, and guidance.

But the tides are turning and powers shifting in Montenai. Once a sickly creature with no purpose, Nalene emerges a strong, willful guardian. This reclusive orphan has everyone’s attention, including a new seer who predicts “only one can survive” the battle to come.
Challenged by dragon lords, championed by outcasts, Nalene meets strife at every turn. As a crisis of faith wages within her, she forges ahead because she won’t give up on hope. What is she willing to sacrifice to fulfill her destiny?

A family tragedy at the age of twelve thrusts Serena into the world of shadowcasting. She relishes the dragon lords’ protection and training but loves her new job and human charge even more.

Because of her great-great-grandfather’s alliance with a vicious nymph queen, Serena finds other Montenaians refuse to trust or accept her. It doesn’t help that she has the same birthmark and orange spark in her eyes as the relative who brought shame to the Brisson name.

Stepping through the portal to Paris allows Serena to escape her family’s reputation as well as her mother’s harsh traditions. Every day Serena pushes to be “worthy of the dragon,” regardless of her brother warning her the path leads to horrible loss.

For years, the lore of dragon and astrei has molded the practices and beliefs of Montenaians. No one has felt this more than the phantom, Serena. This Drifter’s history is the key to Shadowland’s fate. Can she protect them from a dangerous future and still find her way home?

What? You haven’t read books 1-3? What’s wrong with you? Here’s some blurbs to entice you to pick them up stat! 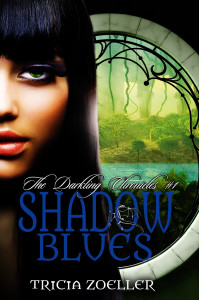 At the age of four, Patrick Benjamin Solomon becomes Anka Rehmling’s human charge. By eight, he can SEE her. At thirteen, he breaks her heart, and by eighteen, she finds herself fighting for his life.

As a darkling shadowcaster, Anka casts shadows in the human world, harnessing some of the earth’s UV light to bring back to Montenai—a world full of darklings, nymphs, satyrs, phantoms, and dragon lords. Her job is crucial to preserving the vitality and balance in her town of Shadowland. However, Anka has trouble following the strict rules set by the Shadowland Council, a ruling body comprised of three dragon lords.

The lords’ decree states all shadowcasters will abide by the rules or face the penalty of harsh punishment, banishment, or death. Torn between her world and Ben’s, Anka must choose to defy the Council or turn her back on love. 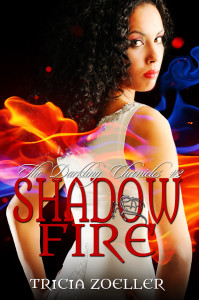 As a darkling shadowcaster, Bianca Rehmling works under the three dragon lords of the Shadowland Council, casting shadows for her human charge on the earth’s plane and harnessing energy to bring back for the balance and wellbeing of her kind. She’s always been a law-abiding darkling, as opposed to her younger sister, Anka. When Anka broke shadowcasting rules over the summer, she suffered the wrath of the council, something Bianca never wants to witness again.

To protect her sister, Bianca harbors some dark secrets, ones that could cause the decline of Shadowland. When a deadly illness called Shadow Fever strikes the village, Bianca fears her own rule-breaking has caused a fatal imbalance in the world of Montenai. She hasn’t been doing her job, her duty, and the dragon lords suspect.

Family or duty? With loved ones suffering, and the dragon lords breathing down her neck, Bianca keeps her nymph friends close and her enemies…closer. When an unlikely ally offers to help, Bianca must decide whether to trust him or brave the heat alone. 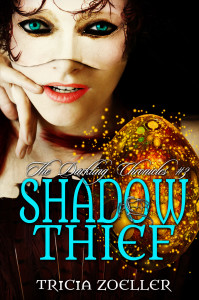 Natcha is a creature of fire, drawing in shadow to cloak herself from the dangers of the world. She has never known what she is or where she came from, but she knows her wings and claws make her different. The sea cliffs of Montenai are her home, the Aglatian Sea her playground, and the phantoms her family.

All her life, she has hidden in the Faunlier Mountains with her sister Nalene. Only the oath she swore as a child to a darkling father to watch over his son draws her toward the turmoil in Shadowland.

When unrest among the darklings, satyrs, nymphs, and dragon lords begins to bleed into her own life, Natcha wagers the welfare of one against the welfare of many. To protect all she holds dear, she must incur the wrath of Shadowland’s leaders and become… the Thief. 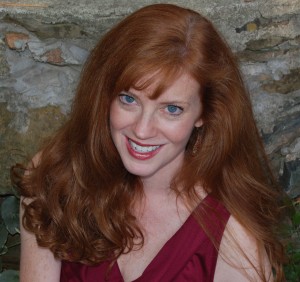 Tricia Zoeller writes fantasy stories filled with mystery, magic, and mayhem. After a decade of working as a speech-language pathologist, she succumbed to the voices in her head and wrote her first book, urban fantasy FIRST BORN, published in May 2013. FIRST BORN is a paranormal mystery about a shapeshifter in Atlanta. It is the first book in the Lily Moore Series.

THE DARKLING CHRONICLES is her young adult series that delves into alternate planes, portals, and mystical creatures.

She lives in Marietta, Georgia with her husband, Lou, her little yappy dog, Lola Belle, and her big orange mutant cat, George. Her two stepsons, Joseph and Robert, make stopovers as well, making sure to keep life an adventure.

Writing has always been a part of her life—like breathing and chocolate. For more information about Tricia and her books, visit:

The cool stuff at the end!

As promised, here’s some cool stuff you haven’t yet seen if you’ve been following Tricia around on her blog tour.

First, I have an exclusive teaser for Shadow Fire right here: 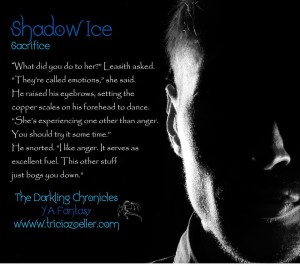 Next, here’s the dream cast for the Darkling Chronicles, created by Tricia. Good looking group, Tricia! 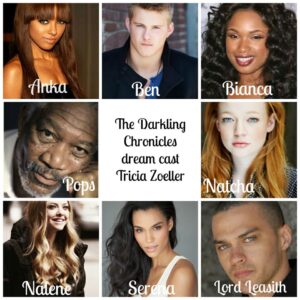 NEXT up, here’s a playlist for the books. You’re always looking for new music, aren’t you? Something to tickle your ears and your fancy? Pop this playlist in when you cozy up with one of Tricia’s books:

And finally, here’s the Rafflecopter giveaway, so you can win some good reading. Enjoy!