Storied Lives by M. A. Ray

Published by JenPonceAuthor on January 15, 2016

So, I’m here to tell you about a little book you should read. I’m telling you this, because if you haven’t stepped into the world of M. A. Ray, this will get you on the right path. 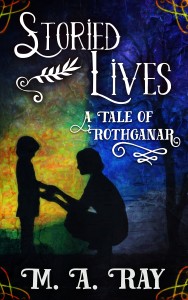 First, I want to show you what it looks like and where you can get it. (Here.)

Now, I’ll give you a run down:

If you love Hard Luck, you have to read this book. It will give you that, “Holy crap, now I get it!” moment that will make Hard Luck even better. This story really should be read first, I think. It makes the events that happen much more understandable and poignant.
Storied Lives is a short in two parts. The first starts from Eagle’s point of view, Dingus’ grandpa. If you’ve read the High King’s Will, then you will have already fallen in love with Eagle. (And if you haven’t, WHAT’S WRONG WITH YOU?) Eagle, in this story, is a shadow of his former self: a man who drew magical creatures to him like bears to honey. The magic is gone now and through Eagle’s eyes, we can see what it really cost when the cataclysm occurred and the magic broke.
The second part is from Dingus’ view, not long before the events of Hard Luck take place. He shows us who Eagle is now, not the broken thing Eagle thinks himself to be, but a man who loves and respects Dingus, something the boy desperately needs in a town full of people who don’t understand him and therefore fear him.
Storied Lives is a beautiful book. You won’t regret reading it.
If you haven’t read the series, read this first and then get the rest right away. You will want them soon enough.

In case you are wondering, here’s what comes next, if you want to read them in order from Storied Lives on. If, like me, you fell in love with Eagle, then you’re in luck! You can read the start of HIS story too.

First off, let me introduce you to Dingus and the gang via book covers: (Read these in order) 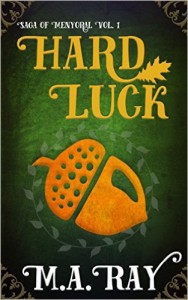 Hard Luck stars shortly after Storied Lives ends. You’ll want to meet Dingus Xavier. He’s a good kid who you’ll get to cheer for as he grows into his role as hero. He doesn’t know he’s a hero, but you will.

The Service is next. You won’t just fall in love with Dingus, in case 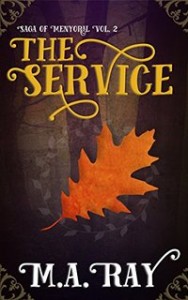 you were worried about being faithful to one character. Oh no. You’ll probably adore Vandis and Kessa and Krakus … oh hell, go read them, will you? And, finally, you’ll want to read Oath Bound. Yes, there are more books on the way. Yes, Dingus’ story will be continued, no worries.

In the meantime, you can console yourself with the shorts the author puts out on a fairly regular basis, like a story of Vandis’ youth (Dingus’ mentor): Vistridir, or a tale about Moira (Dingus’ first love): Invisibly Yours, or a story from Rose’s past (Dingus’ grandmother):  The Thread of Life, or a story in the life of Wallace (Dingus’ friend and fellow squire):  Live Free or Die, or, if you fell in love with Eagle, like me, you can read the epic start to Eagle and Fox’s adventures:

I have it on good authority that the author plans on living forever in order to finish all the books she has planned in the series, so you’re okay to get invested. It’s on you to live long enough to read them all.