Published by JenPonceAuthor on March 23, 2017 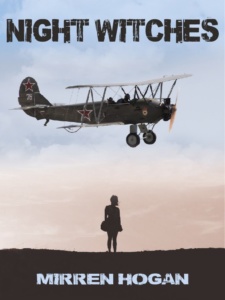 Mirren Hogan is celebrating the release of her historical fiction novel Night Witches.

Searchlights lit up the sky, but they were looking where we had been. Antonina had restarted the engine and nimbly avoided them every time they moved.

“This is too close,” she declared, sounding breathless herself. Another couple of minutes and we’d be safely away. I swallowed hard and tried to force my heart to slow. I didn’t want to come that close again.

A second later, one of our bombs exploded, earlier than it should have. We used bombs with delayed fuses, deliberately set to go off once we were safely clear. We flew so low we could easily have been caught in the blast from our own bomb and blown out of the sky.

As it was, the shockwaves from the explosion rocked the Po-2, making it shudder violently. Pieces of shrapnel flew up at us from below, tearing several small holes in the wings and a large one in the cockpit floor beside my feet.

I felt a searing pain in my arm and leg and realised I’d been hit. A sudden burst of wet heat at the back of my left leg told me I was bleeding. I tugged off one of my gloves and reached down to feel a shard of metal sticking out of the underside of my calf. Although it hurt like nothing I’d ever experienced, I didn’t dare to pull it out in case I bled even more.

“Are you all right back there?” Antonina asked, so at least I knew she was alive.

“I’m fine, but Valentina is going to be busy.”

That was true. The Po-2 could fly as normal, but the poor thing was going to need some patching up, as was I.

Mirren Hogan lives in NSW Australia with her husband, two daughters, dog, cat, rabbits and countless birds. She has a Bachelor of Arts (English/ history), a Graduate Diploma of Arts (writing) and a couple of degrees in education. She writes fantasy, urban fantasy and science fiction. Her debut novel —Crimson Fire— was released by The Dragon’s Rocketship Publishing in October 2016, with more to come. These include a trilogy co-authored by Erin Yoshikawa. She’s also had several short stories published and has co-edited two charity anthologies; for breast cancer research and Plan Australia. 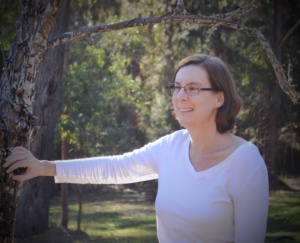