Published by JenPonceAuthor on July 31, 2016

Give a hearty welcome to author D. A. Lascelles!

Gods of the Deep 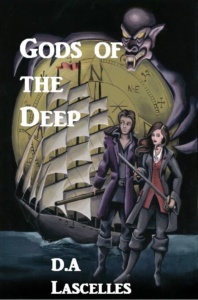 Professor Everyn Crowe is just a harmless academic with an interest in the Theological and Ethereal Sciences. He’d expected his life to consist of quiet hours in the library and tinkering with his newly invented etheric compass. He is therefore surprised when his studies into the quaint anthropological practises of some isolated villagers living on the coast of his native Creatha result in him being unceremoniously thrown into the sea.

Luckily, Captain Rachel Drake of the Neptune’s Wing is on hand to supply a rescue. If Everyn can avoid being cast overboard by her crew for being a witch, she may have a use for his unusual academic specialities.

A collection of tales of pirates, swashbucklers, demons and adventure.

Gods of the Deep originated as an idea about a more empirical methodology underlying magic. It is not particularly a new idea, after all it dates back to at least Arthur C Clarke’s concept of ‘any sufficiently advanced technology is indistinguishable from magic’, but it is one that has always fascinated me. I developed this idea in some of the characters I have played in live action roleplay and started inserting it into my fiction.

It is an idea that can be explored in many different ways. For example, in the Waypoint universe (as seen in some of the stories in Lurking Miscellany) I have a race of aliens who seem primitive and superstitious but whose religion is actually based on ancient technology. Their priests are actually those who understand technology and who can use it to serve their community but the majority are kept ignorant out of a desire to protect them from the dangerous aspects of science. In Gods of the Deep, however, I flip this idea and take a fantasy world where magic is real and have a character who is trying to apply scientific principles to it. That character is Professor Everyn Crowe.

Part of the inspiration for Everyn was Isaac Newton, a man who I see as someone who was trying to make sense of the universe using mathematics as his tool. Newton is considered to be one of the first ‘proper’ scientists – he applied consistent methods to his research in order to gain reliable and repeatable results, something that was largely unheard of at the time. He was also known to dabble in more esoteric arts, being especially known in his later year for his work on alchemy which, naturally, failed but did later lead to modern chemistry. Like Newton, Everyn is seeking meaning through equations and formulae and when we meet him at the start of the story has already had some success in controlling the entities of the spirit realms by the application of such methods. He has designed a compass which allows him to navigate the ethereal realms and has worked on mathematical proofs for many of the properties of ethereal creatures.

Of course, like all academics he needs funding and as always funding comes with a price. In this case, Everyn meets Captain Rachel Drake, owner of Drake Enterprises. She is a merchant venture who is always out for a profit and in Everyn she sees a chance to use his abilities to navigate the ethereal realms as a way to make money. She is initially seen as somewhat mercenary but later shows more of a heart. Through their adventures together we find out more about how the ethereal worlds work and both of them are tested – Rachel finding out what she is prepared to do for money, Everyn being asked to consider abandoning his empirical ways to embrace an ethereal patron as his god. Throughout all these adventures we have the thread of trying to standardise the chaos that is the practise of magic in this world and considering which is better – an empirical approach or total faith in the beings who grant that power.

D.A Lascelles is a former clinical scientist turned teacher. He writes in his spare time and his first short story, Gods of the Sea, was originally published in Pirates and Swashbucklers Anthology by Pulp Empires (pulpempire.com/mag/). His novella Transitions, a paranormal romance novella, was later  released by Mundania Press (www.mundania.com/) and he has also released a collection of short stories under the title Lurking Miscellany.

Reports of a Blur/Oasis style rivalry between himself and R.A Smith are always hotly denied as are the almost non-existent rumours that they are one and the same person. They have on a number of occasions been seen standing next to one another at Steampunk fairs which proves both theories wrong. He is also, despite claims made by his students, neither Australian, Hungarian, John Travolta nor Chucky from Child’s Play.

Thanks for visiting! Check out his book today. 🙂