Published by JenPonceAuthor on October 24, 2017

I invited Juliann to show off her free book (and announce the second book in the series) and here’s what she had to say: 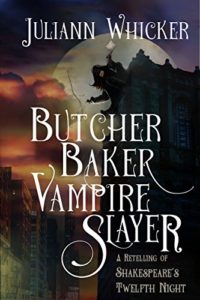 I’ve got something for your blog, it’s a FREE book day for me to get the second one looked at. Crazy, right? Yay!
Do you want more than that? The first book has more generic vampires, werewolves, but some weird crazy monster that’s eating werewolves, which is weird because no one likes werewolf. Yuck. It’s a girl who pretends to be her twin brother so he doesn’t get kicked out of school after their parents are slaughtered by tigers who escaped from the zoo. Obviously not tigers, but no one knows what it was.
So, I don’t write stories without hot guys. If you’ve ever read/seen Shakespeare’s 12th night, you know that Duke Orsino is a total weenie. I mean, he lounges around on his couch all, ‘play on,’ and it’s ridiculous. Who would fall in love with him? My character is named Orion because Orsino sounded too game showy, and unlike the original duke, my guy runs around fighting monsters while dealing with renegade Butchers who are slaughtering the good werewolves. That’s Violetta’s brother, the one she’s pretending to be. So Orion’s fighting her brother and then he’s interacting with her during the day. It doesn’t take very long for things to get crazy complicated. Also deadly dangerous.
Violetta is a strong female without being violent, I mean she knocks out a few werewolves with her rolling pin, but her strength comes from within. Also magic. Anyway, it’s fun. Here it is! Butcher, Baker, Vampire Slayer: A Retelling of Shakespeare’s Twelfth Night
And the sequel is out! Which is terribly exciting for me. I LOVE what happens when Violetta decides she needs to once more don the john. I mean the Cesario. 🙂 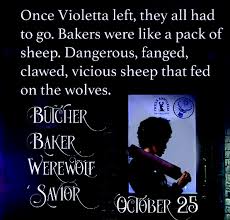 Here is the link to the sequel: Butcher, Baker, Werewolf Savior: Midwinter’s Night

Finally, Juliann has a lot of other books you might enjoy and gorgeous covers to go along with them. Check out her Amazon author page here.