Published by JenPonceAuthor on June 16, 2015

I thought I’d update you on the progress of book four in the Devany Miller Series.

It’s slow. Sorry. I’m writing, but it’s slow. I’m about 25,000 words in with a projected 75,000 more to go. If the story starts flowing again, I’m sure I can knock out those words but I don’t want to write it too fast and end up with less than an awesome tale so, please bear with me as I finish it.

I can guesstimate that it will be ready to publish at the end of July, beginning of August. I can also show you the cover and reveal cover here, now, for you. Yes, you! 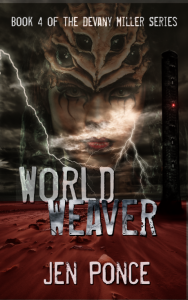 There are sneaky hints in that cover I’ll have you know. And if you’re interested in speculating just what Devany will be facing in book four, then check out my short story collection: Touch But A Web for clues.

World Weaver might just be the most fun I get to have world building in Devany’s world. Most of the action is going down in Midia and we’ll visit places heretofore unseen by earthly eyes. If you’ve read book three, you’ll know that Devany has extreme motivation to get shit done. Can she manage it without breaking down? That’s what she’s wondering. Then there’s Neutria with her delusions of grandeur.

They are not delusions. Only truth.

Tytan will be there, as will Kroshtuka. And Liam will be finding out that he has inherited some of his mother’s … well. I won’t spoil it for you if you haven’t read book three.

Long story short: I’m working hard to write a kick ass story for you. I will have it out late this summer. I promise.