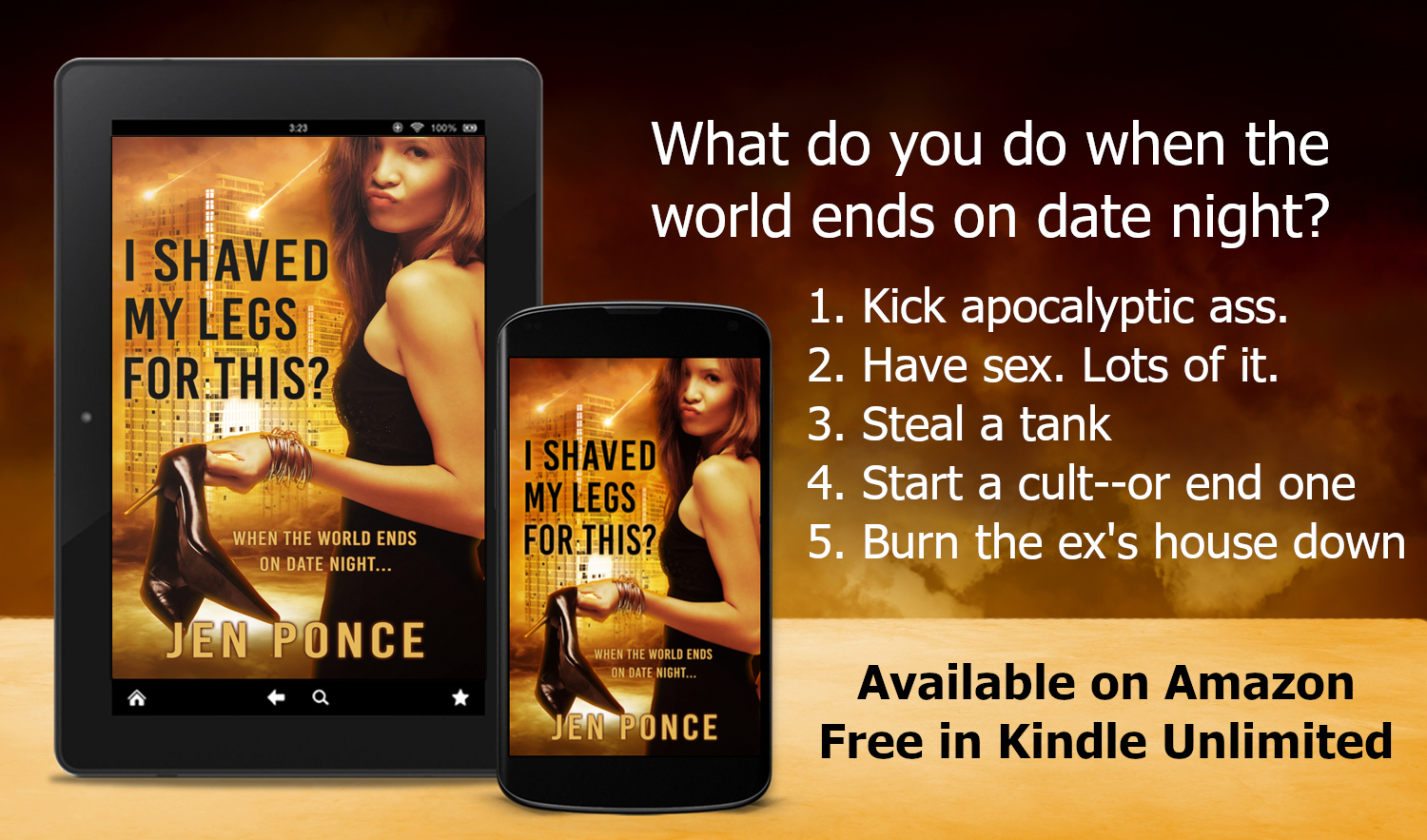 Reverse Harem WIP: I Shaved My Legs For This?

Published by JenPonceAuthor on December 13, 2020

When I saw this book cover for sale by DLR Cover Design, I knew I had to have it. The look on her face sold it. Why was she so annoyed? (Aside from the fact that the world was ending, of course.) Who put that look there and why? And yes, this is a reverse harem, so there are three interesting and hot dudes to share the terror, horror, and comedy of the end of the world

Reverse harem is my JAM. Add horror to that? And slapstick? OMG.

I’ve had the cover for over a year, maybe two. I wrote other things. Finally, I began to write on this one. First, I thought I’d have an EMP strike, but it got entirely too technical too fast. I’m used to dealing with fantasy elements. Magic? Make that shit up! But EMPs are like a big thing in apocalypse fiction and I was sure to get stuff wrong–and frankly, I didn’t want to spend hours researching EMPs, not when the purpose of the book is to get Dani in bed with three hot dudes and help her realize her Fuck It Bucket List in full.

And so, I realized I needed a sillier apocalypse, a goofier one you might say. And once I figured out what I wanted, the story began to flow like water.

Here’s an excerpt below. (Yes, it’s reverse harem. Yes, it’s ridiculous. It’s SUPPOSED to be ridiculous. If you know me, you know I write a lot of horror and I’ve written a lot of more serious stuff lately. This one, I decided, needed to be fricking goofy af.)

You also may need a little context. The apocalypse I decided on was mutant spiders from outer space. Spiders, as we know, get weirded out with vibrations. They also don’t like cats. Finally, the spiders in this novel can attach themselves to your neck and drive you around like a robot. (Trust me, it makes sense in the book. Sorta. 😀 ) Finally, this IS a reverse harem, so we have not one, not two, but three dudes who have caught our intrepid heroine’s attention.

“Can you imagine?” Tony asked. He was cutting away at the webbing too, though it was slow going. “All of us with leather collars, a cat strapped to our chests, vibrating dildos in our hands as we charge the drones? That would be epic.”
His voice was dreamy as he pictured it and despite herself, Dani’s brain joined in.
“If we all wore vibrator, it would jiggle our bodies and keep the spiders from gaining purchase,” Jackson said. “Maybe.”
“I don’t think I could run well with a vibrator up my ass,” Tony said, grunting as he twisted and contorted his body to try to cut himself free.
“No one is asking you to stick anything in your ass,” Jackson said, then his voice turned sly as he added, “unless you ask nicely.”
“Oh ha ha.” Tony made a cut and slid down in his bindings a couple of feet. “Yes. If I point my toe I can just touch the sidewalk.”
Dani bit down on the sarcasm that threatened to vomit all over him. Tony meant well, Tony was great, it wasn’t Tony she was mad at.
It isn’t Tony I’m mad at, she reiterated.
The worst part of this apocalypse was the realization there wasn’t anyone to be mad at. The spiders were just doing spider things. As far as she could tell, they weren’t doing it out of anger or malice. It was survival. She couldn’t even be mad at Preston for being a drone. It wasn’t like people had a choice. And there were plenty of other things she could be mad at Preston for anyway.
No, no bad guy or wicked lady. Nothing to focus her hatred and fear on. It just … sucked.
“They have small vibrating butt plugs,” she said, apropos of nothing, wanting nothing more than to get back to the safety of the mall, to escape this sticky web, to avoid becoming a skin sack with a creamy, mushy center. Until that moment when she could breathe again without terror, she needed something to distract her.
Butt plugs, by their very nature, were distracting, and so she said, “Raise your hand if you’ve ever worn a butt plug.”
They all looked at her, then each other.
She laughed, though she felt like crying. “Right. Blink twice if you’ve ever worn a butt plug.”
“It’s going to be okay,” Max said.
She blinked furiously, trying to hold back her tears.
“Wait a minute, I lost count at twenty-four. What does it mean that you blinked twenty-four times? Twelve butt plugs?”
This time she laughed for real, though it was a watery one. Leave it to Jackson to crack a joke at a time like this.
“Not that I’m butt plug shaming you. It’s just … I’m concerned. No. Not concerned … intrigued.” He paused, thinking. “Yeah, intrigued.”
“I haven’t worn twelve butt plugs.”
“How many times are you guys going to say butt plugs?” Tony asked.