I’m a writer of kickass women and oogy monsters!

What does that mean?

It means I write stories about women doing things, whether those things are kicking ass, falling in love, hunting demons, raising their kids … basically all the things women do! I don’t write about women who don’t have a purpose. You’ve seen those kinds of female characters, haven’t you? The women who are only in the story to pretty things up, to help motivate the main character (usually a dude),  or to run through the forest in their bras and panties.

If you ever see a woman in one of my stories running through the forest in her underwear, watch out. She’s about to kick ass–probably MY ass because how dare I objectify her like that. (I seriously work hard not to objectify people in my stories. I probably fail at this at times, but know I do try to make sure every character in my stories has agency, has humanity, has intelligence and their own hopes and fears, dreams and hatreds.)

So, you’re one of those feminists who hates men?

Hahaha! I AM a feminist, but I don’t hate men. I have three of the best boys ever and there are great men in my life. Thing is, I believe that we still have a long way to go before we see gender equality, and I am a feminist until we no longer see people defending rape jokes, blaming survivors, or threatening women with rape and death for sharing their opinions.

Why should I read your books?

Because they’re fun! Why else would you read? Okay, if you like tragedy and tears, my books might not be for you. I don’t write books like John Green or Nicolas Sparks. I write horror and fantasy. I think magic is important and you’ll see it everywhere in my stuff (even when it’s not overtly magic, it’ll be there.) I love adventure and awesome characters who are flawed. You’ll also see characters who are lesbians, bisexuals, or gay. I try hard to write engaging, believable characters.

This world needs more readers. Readers are open-minded, imaginative, and more empathetic. Picking up a book, whether one of Jen’s fantasy-fueled novels or someone else’s thriller, puts another person’s perspective of the world in your hands. (Unless you’re telepathic, then you’ve already experienced being in another person’s head. Good thing about books? Organized thoughts. Bad thing about people’s heads? Unorganized chaos, judging from my own stream.)

Pick up a book and enter a new world. See Tibet without getting on an airplane. (Good for those of you who are afraid to fly.) Live with cannibals without getting eaten. (Good for those of you who don’t want to be eaten.) Become a lion-tamer, an assassin, or a lover. Ride a dragon, eat a dinosaur, (Come on, who hasn’t wondered what they taste like?), or fall in love with a man or woman

Do it from the comfort of your couch, your bed, the hard, plastic seat on the subway next to the man dressed in pink taffeta, singing songs about chickens. Whatever you do, don’t stop reading. And if you haven’t started reading, grab a book! 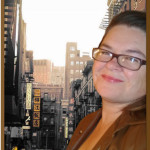 Jen’s love for reading came from her mom, who valued books above all things (except maybe the Dallas Cowboys and Michael Jordan.) She writes for the same reason some people run marathons, climb mountains, sculpt, paint, or put on suits of Mentos and jump into vats of Coke: because there is a fire burning inside her that doesn’t let her NOT do these things. Writing is necessary, like breathing or double chocolate chip cookies and perfectly salted potato chips.

Reading is not a lost pastime and Jen refuses to believe that something so magical could ever go away. Even during the zombie apocalypse, she will be reading. She will just have to learn how to wield an ax in one hand while holding her book in the other.

Jen Ponce lives in the Panhandle of Nebraska with her boys, her cats, her goldfish Reggie and a large supply of books that help insulate the house in the winter and expand her mind.

She loves connecting on Twitter and Facebook. You can also send her an email and she’ll write back. Sign up for her newsletter, too, so you can get special offers in your inbox not available to everyone. The link is up there on the right of your screen.

Get the latest news from me to you, plus cool stuff no one else gets to see. Probably. :D