Published by JenPonceAuthor on November 9, 2014

Are you participating in National Novel Writing Month? No? Why not? Don’t you have a sense of adventure? What? You value your sleep, your job, and your familial connections? You do not laugh in the face of carpel tunnel syndrome and instead crawl under your comforter and whimper at the very idea? 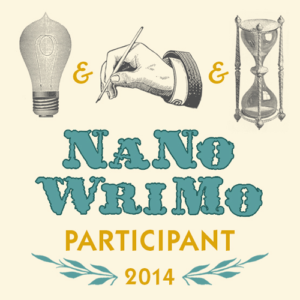 Fine then. Check out these 10 Unrules for NaNoWriMo, so that you, too, can either write or avoid writing in whatever crazy manner you choose.

I know, you’re already gasping at my audacity. But seriously folks, some people write by hand. Some write slowly even with a computer. Some people have learning disabilities that make it hard to write fast, or think fast, or sit still long enough to get the words on paper. NaNoWriMo does have a goal, that 50,000 words that’s so elusive to some. That doesn’t mean you can’t set a DIFFERENT goal for yourself and still join in the fun.

2. You do not have to finish your novel.

“Gasp! What good are rules if you’re just going to shit all over them, Jen?”

“Rules, schmools.” Listen. What’s the purpose of NaNoWriMo? If you want to read the official version, go here. Got that? Now, unofficially, the message is this: sit your ass in your chair and write your damn novel already. See how easy that is? I dithered around for years not finishing anything. It wasn’t until I saw A & E’s version of Pride and Prejudice that I knew what I had to do. I had to finish my novel because my reward would be the $50 box set of DVD’s. That was my motivator. And did I finish my novel? Damned skippy. It took me a little less than three months.

NaNoWriMo is like my A & E Pride and Prejudice box set of DVD’s. It gives you a challenge and a finish line. It gives you pep talks and cool gadgets to record your word count. Most importantly, it dangles your own finished novel in your face. “You know you want this!”

The most important part about NaNoWriMo is the notion that you need to write X amount of words a day to reach 50,000 words by November 30th. Why is that the most important part, you ask? Because it really isn’t the number of words, but the willingness to sit down every day and write, to make a commitment, to work towards your goal instead of sitting around in a coffee shop talking about your goal. Get it?

3. You don’t have to start a brand new novel.

Sure, it’s fun to dive into a whole new project. But what about your 150,000 space opera that still isn’t finished? That only needs 45,000 words to be complete? Write that fucker during NaNo even though it isn’t brand new. Who’s going to stop you? There isn’t a NaNo police force. No one is going to be busting your chops or breaking down your door because you dared work on something you started back in July in a drunken stupor. (Or however you usually start your novels. Mine start in a dream or in the bathtub. Or being silly in private messages.) 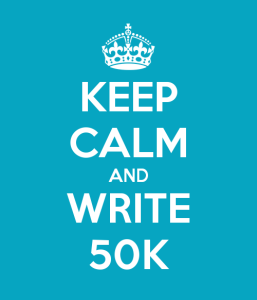 Heavens no. Don’t worry about editing or revising during NaNo. I know it’s mentioned a lot but it bears repeating. There’s something to be said for free writing, for going with the writerly flow, for letting the story and characters take you where they want to go. It doesn’t always end well, be warned. Sometimes you do this and you end up with shit. Just remember you can start out with shit. It’s okay. (That’s what revisions are for.)

5. You don’t have to write the story linearly.

Let’s say you have all these great scenes in your head but you aren’t sure how to hook them together. Can you still do NaNo? Of course. Write all those blips and bleeps down. String ’em together later. If it works best for you to write the end, then the middle, then the climax, then the first fight scene, (Where the manly Duke of Withers argues heatedly for Lady Shiney’s diligent attention to his, aherm, staff) by all means write it that way. Does it mean you don’t win NaNo if your story isn’t a coherent whole at the end of the month? No. All it means is you have more work to do later in stitching those pieces together. 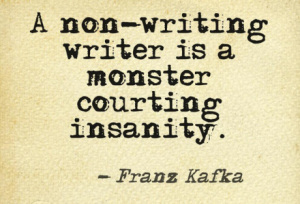 National Novel Writing Month isn’t about strict adherence to rules. It’s about learning what it takes to be a writer if you haven’t done anything so ambitious before. It’s participating in a fun event with fellow authors, whether or not you’ve participated before. It’s about encouraging new authors to try something new, to write, to share in the joy of creation if you are an old hand.

If you want to be writing buddies, you can find me on www.NaNoWriMo.org as Skunkmelon. (Click here if you’re lazy.) Join up, join in, have fun and do whatever the hell works best for you!