Published by JenPonceAuthor on October 25, 2014

What’s up with all the rules? Why are people so concerned about following them? I don’t see this same kind of vigorous adherence when it comes to blinker usage. *grumbles darkly*

In the interest of being a stubborn cuss who likes to be contrary, here are my 10 Unrules of Writing. The best part? YOU DON’T HAVE TO FOLLOW ANY OF THEM and you can still be a writer. Seriously. Totes true.

1. You don’t have to disconnect from the internet.

Word. I get lots of writing done and I’m on Facebook all the time. I have a problem, I really do. Even so, I set my writing goals and meet them most nights. I get my writing done AND I can still peruse the funny memes and yummy recipes my friends kindly post every hour on the hour. 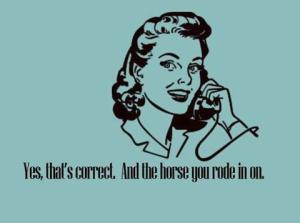 2. You don’t have to write every day.

Now, if you’re far gone, you might not end up with anything worth saving, but you can still have a drink or two and write some pretty good shit, for the love of all that’s unholy. I’m not advocating substance abuse here, but don’t feel like you must abstain because it’s something you heard that one famous author say. 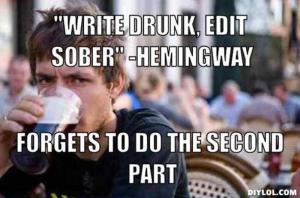 Nope. You don’t need alcohol or some dank weed to get the words down, either. If that’s not your scene, then don’t chase the pink elephant dream before you sit down to write. I’ve come up with plenty of insane shit writing dead sober, so don’t think you must rely on mind-altering drugs to write weird stuff.

Oo, I said it. Now I love to read; it’s like breathing to me. (Something of a necessity, ya dig?) But maybe reading makes your eyeballs bleed. Maybe you enjoy reading but it’s slow going and you feel guilty that you haven’t read 200 books already this year.

Don’t sweat it. Read what you can, read the things you enjoy and if you’re feeling particularly festive, try something new. Reading helps expand your vocabulary and gives you an idea about what other people are writing, so I wouldn’t stop doing it. Read what you can and rock on with the writing.

6. You don’t have to write like anyone else but you.

I’ve heard some people say that you should emulate the greats in order to become great yourself. I’ve seen beginning writers give in and change things in their WIP because a more experienced writer said that it would look better their way. Now, you should listen to feedback–it’s very helpful. But you shouldn’t change the way you write because someone else says they don’t like it. Protect your voice–not at the expense of readability, of course, but don’t stop plopping all your prepositions at the end of sentences because some Snooty McFruity said it was bad form.

7. You don’t need to follow the advice of a writer just because he or she has been published.

Being published doesn’t make anyone infallible. It doesn’t make them the gods of all the writer knowledge. When someone gives you a set of dictates and tells you to follow them, be wary. Read it, sure, take from it what you can use, yes, and then discard the rest. (That includes this list, by damn.)

8. You don’t need to write seriously to be taken seriously.

For some reason, serious stories hold more weight with people than funny stories. I don’t know why this is but I saw 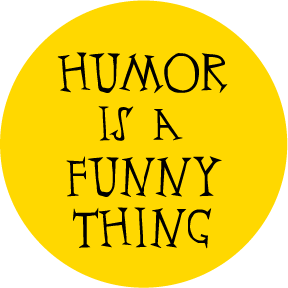 it in my creative writing classes over and over again. I could dash out a story full of darkness and despair and be assured that it would be well-received. The funny stuff I sweated over was often dismissed by the instructor. (My classmates enjoyed it. Apparently we were all uncultured Plebeians, eh?) Write what speaks to your soul, nothing more, nothing less.)

9. You don’t need to write a million words before you can write for publication.

That whole idea of a thousand hours of practice to make yourself a genius at whatever it is you’re practicing is a bunch of twattle. Here, read this if you don’t believe me. You can write amazing things right out of the gate but probably you are going to need practice. How much practice depends on your skill level when you start, how hard you apply what you learn, and etc … An arbitrary million words or 1000 hours isn’t going to improve you if you aren’t willing to learn. 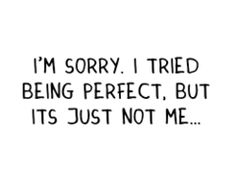 This stops a whole helluva lot of people. Face it: nothing you write will be perfect the first go. It just won’t be. It might NEVER be perfect. Ever. Are you going to let that stop you from writing? Life isn’t perfect anymore than it’s fair. So work your ass off to make it good enough but don’t lose too much time chasing that ephemeral perfection. You won’t catch it and do you really want to have lived all your life without attaining ANYTHING? No. Kick perfection back into its box and strive to be good. Maybe even great! But fuck perfect. Fuck it.

There you have them. 10 Unrules to Writing. Take them or leave them as you see fit.